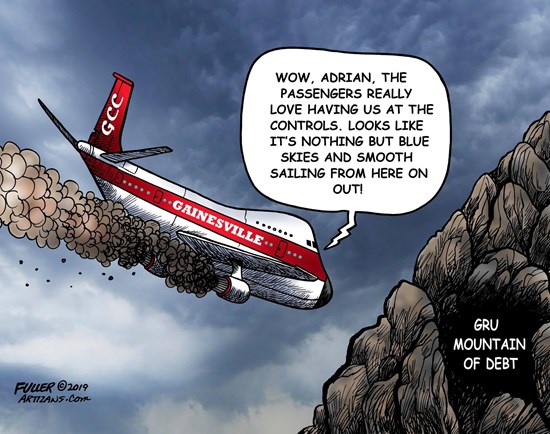 I want to thank all of you for your dedicated support during our recent campaign. We made many new friends. We shall live to fight another day. On February 7, 2019, I formally announced my candidacy for Gainesville City Commissioner, District 4, as well as my three campaign goals. The election was March 19, 2019 and unfortunately, we lost.  However, these were, and still are, my goals:

My plan was summarized as follows:

Change the culture of city governance

More than a change of policy, this requires a change of attitude that will put residents and citizens first, especially in decisions impacting the place they live or work. Our elected officials work for the citizens, not the developers, not the staff.

As a private citizen, I will continue to work to ensure greater transparency in the decision-making process, consistent with Open Meeting and Sunshine laws, to include General Policy meetings, which are not televised, and one-on-one Commissioner meetings with Charter officers. The Commission needs to set a tone in public meetings that welcomes public comment before motions are put on the floor and Commissioners "telegraph" how they will vote.

The Gainesville Sun recently acknowledged that GRU reserves are being rapidly depleted and that the GRU transfer must be reduced. This leaves the City with only three options: raise taxes, raise utility rates, or cut services. We are in this predicament because of the two incumbents' 2017 decision to acquire the biomass plant.

In my recent campaign, I asked voters to hold the incumbents running for reelection accountable.  However, the voters decided to reelect the incumbents and the chances of anyone being held "accountable" are slight. The Gainesville Sun recently recognized that development decisions must be carried out in a way that protects the essential character of our historic neighborhoods.

While my former opponent has long promised this, he backed the GNV R.I.S.E. high-density infill plan sold to the public as a way to incentivize "affordable housing" (nearly to the end). Many of you knew it would destroy neighborhoods and benefit developers.

Seeking a “vibrant” downtown, he proposed an outdoor amphitheater at Depot Park (and backed off again in the face of opposition).

He also tried to eliminate limits on the frequency of loud, amplified music events that will make life miserable for nearby residents (then seeing massive opposition, backed off again and moved to"vote it down" and revamp the entire ordinance when challenged).

Although the incumbents have been returned to office, we all have reason to be extremely concerned that the city will not be able to afford new  spending, even to raise employee pay, or to incur more debt without serious consequences.

I have over 45 years of public service to my state and country and have spent much of the past five years back home in Gainesville heavily engaged in public policy as an "active citizen". I will continue to stay engaged. Visit the "Issues" section to see the positive impact my common sense writings have made.

This opinion piece, published by the Gainesville Sun on Sunday, January 12, 2020, suggests a better way to debate impeachment, despite our polarized society.  Acknowledge valid points made by others and focus on the known facts.

Turning to national issues, this piece recently published by the Gainesville Sun addresses the difficulty of talking to others who have bought in to misinformation on the Internet, even close friends, due to polarization.

This opinion piece was published online by the Gainesville Sun on November 13, 2019. The controversy continues regarding the current majority's efforts to limit public comment and criticism at its meetings. However, the Mayor did finally agree to take public comment on issues before the Commission began deliberations and placed a motion on the floor.  He is doing so as a matter of the Chair's discretion. However, he should put it in the new rules.